This was a gorgeous Wednesday after all the much-needed rain.  A great way to start our Wednesday.

The Education Moment was presented by Trish Wilder with Edward Jones. The message of the day was that networking is not about selling, it’s about building relationships and that despite what many believe, introverts can be very good at it as long as they think about being “InterestED, instead of interestING.”

It’s a good message for everyone. Ask questions, don’t talk about yourself and follow-up within 48 hours of the initial meeting with a call, text or email. Listen and pay attention to what’s important to the other person.

Member Spotlight this morning was Terry Lawrence, a relatively new member to the Hometown 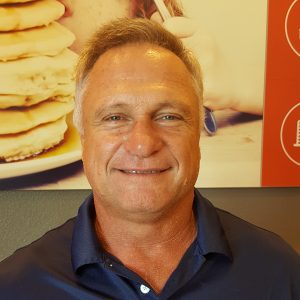 Networking Group but not to the community. Terry is the Outside Fleet Rep for Reliable Automotive. He shared the spotlight with his boss, founder of Reliable Automotive Brad Hullman. Terry started by sharing a bit of his history, one being that he was a high school and college athlete. While he only took a moment to talk about himself, It sounded like he played several sports but a high school injury pushed him to baseball where he worked his way up and played at Texas A&M and was drafted by the Giants. Even today baseball plays a part in his life as he is a Hitting instructor in the area working with kids that have gone on to successful careers.

Being a Hitting Instructor actually was how Terry met his current boss, Brad Hullman of Reliable Automotive. The two hit it off right away and Brad felt Terry’s decades of experience in retail/wholesale business and personality could transfer to the Auto repair world working with outside sales. Terry admits he had a lot to learn in the business but what he learned quickly was how great a guy Brad is and how much he genuinely cares about his clients and his community.

I guess at the end of the presentation today I walked away with feeling that Reliable Automotives is a company with a heart. Brad shared a story that I think is going to stick with me. He shared his faith first all of in Jesus and how that has set a foundation in his life, and how back in January 2013, after only 6 months in business,

there was a fire. Three cars were destroyed, an employee was injured and he was left with a mess. He said literally he and his wife were sitting among the ashes wondering what they were going to do. While they sat there wondering about their future the door opened and in walks an 81-year-old woman named Lucille. She had a message for him. She told him that the Lord made her turn into the lot and go in to let Brad know that ‘everything’s going to be all right.”

Brad asked her how she knew they were even in there as the building looked vacant. She replied ‘The Lord told me.’

I can almost picture a little old woman thinking, ‘well duh…the Lord told me to pull in so obviously you were here.’  In any case, Brad admits that his encounter with Lucille gave him all he need

ed to know. God was indeed with him and Reliable Automotive WAS going to go on.

his San Marcos shop that destroyed three cars, injured an employee and all but destroyed the building. He explained that as he and his wife sat literally among the ashes trying to figure out what he was going to do, an 81-year-old woman named Lucille came into the building. They were surprised since the building was boarded up, no electricity and clearly looked closed and empty. Yet she showed up. Not only that, but she had a message for him. She told him that ‘The Lord told her to pull

Now about 5 years later he’s getting ready to open his 3rd operation. He has the original in San Marcos, another in Buda and the third and final one is going to open in Kyle in the coming months. He admits to being blessed and he is sharing the blessing with others. He’s running his business in a manner that I wish all business owners would adopt. Brad’s goal is to have truly satisfied customers. He’s quick to say he’s not perfect but he’ll promise when you leave his business you will be satisfied and know you were treated fairly.

How about checking us out? We welcome you to join us on Wednesday morning and meet some great local business owners.  What have you got to lose? Your first breakfast is on us!

You can find out more about our group at: https://hometownnetworking.org